These Are Our Family Comedians! 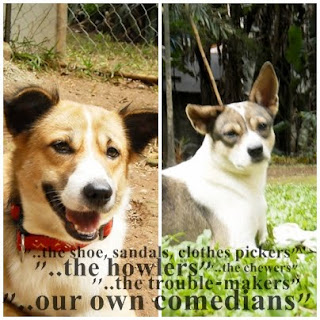 Dogs in a neighbourhood I know, they are unwanted, most of them are because the excuse of those people who claimed themselves they have a religion. Muslims not suppose to have dogs in their homes or family, because they said that these are disgusting animal, what that they called hmm, najis.. well I think it because of they are dirty, if we don't bathed them..and their saliva brings any possible dangerous bacteria. those are facts.

but people who really have a religion are those who respects and love nature, not a man with his car hit a cat and not even just a slight to checked out that the cat was okay but he just ran away and shouted 'don't worry, I'm a Muslim!'. Is that ironic?? That's embarassing, in the name of my religion, he shouted just like that when the people over there shouted him to stop and should take his responsibility. Those people were mad and cursed that man...

I'm an animal lover, my whole family loves animal.. My grandparents, both sides (mom and dad), have their own experience in take caring dogs. They have they function, to guard their owner's home and bring the joy and happiness any human cannot have without their dogs presence. Dogs are full of joy with their stupid puppy faces, bitting your socks or your shoes, chewing all the stuff around them, jumping all around when you just came from school, accompanied you when no human can understand your situation, just cheer you up when you get sad, tease you to play with them, anddddd many more list I have to assure you that dogs are not only their annoying barkings and scary bitings...

I also have bad experience with dogs. When I was 3 years old, a female dog bit me while she was nursering her puppies. I was too close to her and try to pet her. She growled and bit me, that was my mother said to me. And then my own dog, new one, he's pretty mental. He bite and growls to any of us, even who's close to him, who's his own OWNER.. But I don't mad at him, he's just have to be educated that's all, that doesn't make me less care of animals..
They have pure hearts, they hurt you when they have to, to protect themselves. Those who doesn't like animals, have to questions themselves about their hearts..

I just don't like when people start to make sotoy and annoying questions why we (my family) have dogs.. I just get tired of them.. They have to read more books, movies, TVs, articles etc. about how dogs or cats change so many family's life and teaches us about life. Dogs or cats (i prefer dogs :D ) put their family together in one place, just to talk about their dog/s, and then they realize that is already a family quality time..

there are so many positive things you can have when you have an animal in your life comparing to how disgusting they are.. you just willing to sacrifice to achieve the step to a higher meaning of life... animals balances our life as a human on this earth. we are not live alone, we have duties to make our earth more peaceful. at least try, because you breath oxygen, you stand above ground, you drink water, you eat earth's offering and animal's meat, you live and then you die..

sooo not talking more about death, I'm going to show you my ultimate-annoying-troublemaker-joyous-barkers-and-bitters in the entire world.
and the funny thing is they howl whenever there is Adzan berkumandang around my neighbourhood... 'Allahuakbarr...' and my dogs goes 'auuuuwwwwwwwww...awrrrawrrr..auuu..'. They sing with the guy who does Adzan hahahahaha 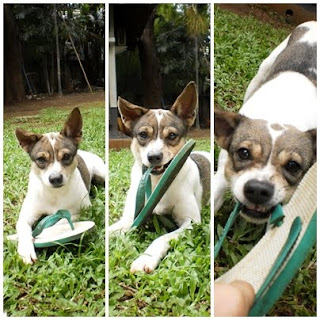 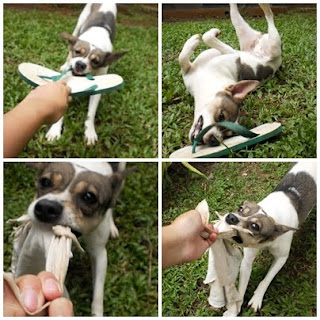 Her name is CIKITA
(I used to call her Cipa, Cipita, Chiquitita, whateves...)
She likes to steal our sandals or shoes or even a leave, anything to satisfied her mouth. If she really wanna play with you, she tease you with stealing someone else's or your shoes! She's a happy, jumpy, spoiled, whining dog who loves to chew anything. She made weird noises like i've never heard that kind of noise from a dog, ever (can u imagine what its like?? naah, no way..) She likes to burst into our house which we shouldn't be letting her in our house. She loves to run soooo fastttt, jump here and there and then she stopped gasping for air (making weird noise again, different one), like she has an asthma or somethin hahaha very funny to watch at the same time I feel really bad for her..mahahaha..
She's a very spoiled dog, loves to roll around and be petted, also, jump on your lap and marks her paw on your pants and shirt...arrggh that's pretty annoying... 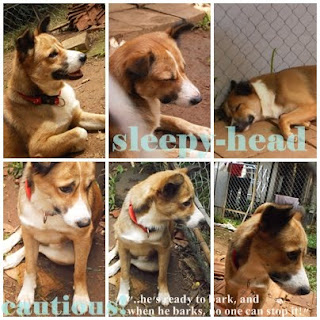 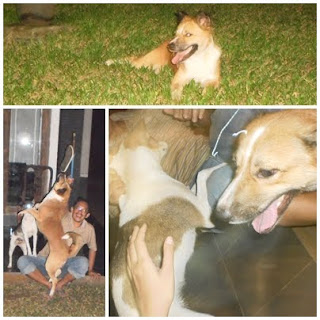 His name is Ciko (Coco, Cipopo, Koh)He's the most dangerous dog I've ever met in my entire life. He's vicious, ferocious, and a biter! Behind those good looks, handsome, cute nose, cute puppy eyes, oooww, don't be fooled by them, because from far away, if he doesn't know you, he'll bark ferociously. And scary but funny, I think that he's a bit mental, you know, unstable, moody dog, insecure. I have mom, dad and sister who take care of him kindly, but sometimes when he's in a bad mood and not trusting anyone, SNAP, he'll bite you, a sign of warning. and then growls you..
At first i was a little bit dissapointed at him because, he bite almost all of the people around my house (even a little kids, he hate kids, especially their laughter), we thought that he should be given away, took him to the animal shelter..But thank God, my dad has already put his heart into Ciko and seeing him that he still have hope to stay with us.
After a year later, he gets better and better, even his moody is still going on, he growled unreasonably, but hey we still love him because he is making progress..
He's also a smart dog too, when its time to go to his cage, he'll get in..he's also patient too..he's just adorable to watch, just wanna cuddle him, but becareful, he'll growl hahahaha...

*wondrouslifeofadreamer
sorry for the bad spelling and English, bad at grammar haha :D

The Hustle of A Single Parent: SUSAH SINYAL (Movie by Ernest Prakasa) (1)

Januari 06, 2016
Well, that sentence just slapped on your face with denial of your unhappiness: "yea, sure, I never dimmed my f*ck*n shine out, I still have hopes. Dude, I'm still young, come on!" *insecure* *think back* *sigh, tired* *opened Facebook and then cry*

One fine day, back in the days when I was in university studying Interior Architecture, one lecturer tell us about a very deep song: "...John Mayer was making this song while he's in his mid-twenties. He was having a crisis."

That, was the very first time I've found out that age crisis doesn't only happened for the middle-aged people. It is also happened for the twenties people. Yeah, read-me! That quote somehow summed up my life recently. I was totally in very dark space when I dropped out from a life that I have build so hard to get on top, and unfortunately, I backed down.

I remember back when was so into my work and so damned good at what I love (I am not bragging, I just feel like damned good for the…
2 komentar
Baca selengkapnya

Mei 05, 2019
I admit that I have that aura of a sassy dancer. Although, I never want to portray that to the public. I have the most introvert way to hide it. But also, I have this weird way to express it and it cannot be controlled.

27 year old me still have that and waiting to be unleashed, soon. HAHAHAHA.

Rosalinda reminds me how great I am watching this favorite childhood telenovela endlessly. I love Thalia and her music. SOOOOO GOODDDD!! #dance